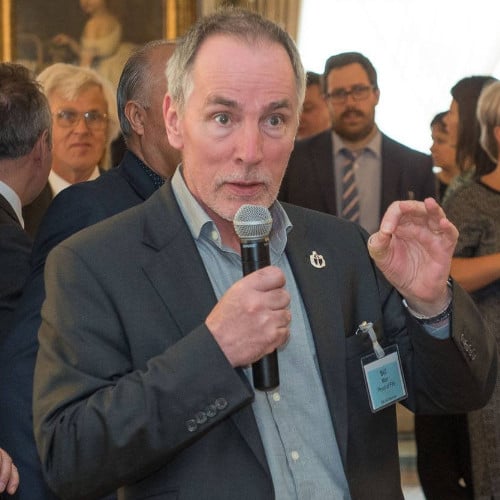 Sławek Strzykowski is a visionary and a polymath: he has a Master of Arts degree, a post-graduate degree in law and a PhD in AI from the Polish Academy of Science.

He was a captain in the Polish Prison Service, a Business Analyst with SAS Institute and 10 years in Business Analytics with Microsoft. He has always been ahead of his time: back in the 90’s, when computer science was in its infancy, he developed the first Polish national database of offenders.

He left a high-flying career with Microsoft, driven by an especially personal passion to use the power of technology to improve people’s lives in very tangible ways.

He now runs UnderAnt in Warsaw, Poland, which designs and produces prototype Unmanned Aerial Vehicles – UAVs or drones, customised to each customer’s requirements, and a sister company, Anteya in England, which provides software and algorithms for the drones and takes care of sales and marketing.

His initial impetus to set up his own companies came from his daughter, who is diabetic. His vision was of a national network of drones that could deliver urgently-needed medical supplies such as insulin anywhere in the country at moment’s notice.

Developing the theme of technology as a solution to real-life problems, he hit on the idea of employing drones to help people with autism.

Sławek saw that people on the autistic spectrum can be overwhelmed by their emotions, leading to what is referred to as a meltdown, when the person can become unbearably distressed and/or completely uncommunicative.

What if there were a new way for autistic people to actively take control of their emotions? Sławek, equipped with his PhD in Artificial Intelligence, teamed up with his wife Edyta Jakubowska, whose PhD is in Biocybernetics and Biomedical Engineering, to look at the problem.

Our emotions can be read via wearable sensors, which detect fluctuations in indicators such as heart rate, skin temperature and electrodermal activity.

Drones can be programmed to read the mood of their controller via the sensors, and spot when emotions start to overwhelm then. This is where it gets clever. The drone then ‘behaves’ in a progressively more or less chaotic fashion, until the controller brings it back under control. In doing so, the person controlling the drone takes control over their own emotions and avoids the emotional tipping point: the meltdown.

This is modelled on the technique of biofeedback – using the conscious mind to influence the unconscious mind and to manage emotions. Essentially, in caring for the drone, the person cares for themselves and manufactures their own positive outcome.

Sławek is currently looking for partners in the UK university and finance sectors to develop this ground-breaking concept, which he has labelled ADOSS - Autism Drones-Oriented Support System.

That is a massive logistical and technical undertaking, but Sławek considers it very practicable, comparing it to the emerging network of chargers for electric vehicles. In the same fashion, the UK could be covered with UAV relay stations. Drones could hop from one relay station to another on long missions, transferring their cargo to a fully-charged UAV and docking to the charging station to be ready for the next mission.

For long-range missions, Sławek’s companies are designing unmanned planes that can carry a far heavier cargo than the drones and cover much longer distances: 300 or 400 kilometres in one hop.

They could be used to carry medical supplies across Africa for example, where Sławek has a strong customer base, or between Europe and Africa.

Imagination is More Important Than Intelligence

All the technical knowledge in the universe will not break new ground or innovate new uses for existing technology. That takes a creative spark.

It just so happened that Edyta Jakubowska, Sławek’s wife, is very keen on Irish dancing. For a while, the pair discovered and nurtured a shared creative passion. So much so that the pair set up a successful Irish dance studio and performance team which participated in various events across Poland including venues such as Warsaw National Stadium and appeared on Polish TV.

If Einstein really said: “Imagination is more important than intelligence,” it seems Sławek and Edyta have both!

A small payment has been made to the National Autistic Society to acknowledge the advice and guidance on their website page: How to talk and write about autism.